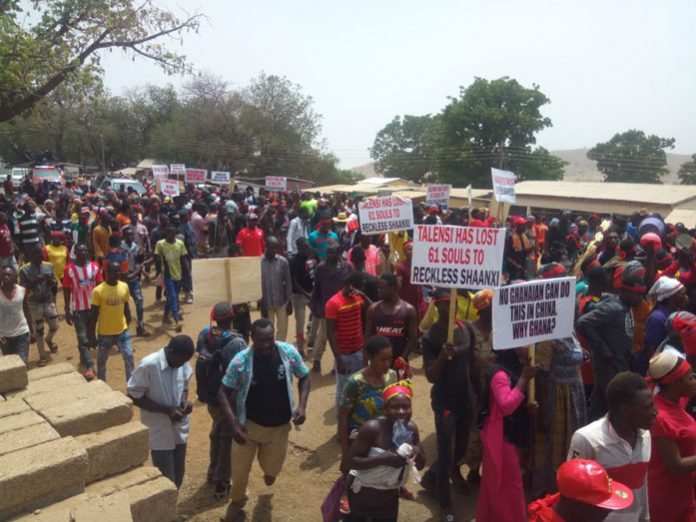 In a petition signed by one Mr. Tii-roug Zumah Yaro John who is the convener of a group called Gbane for Peace and Development; a call has been made to all relevant stakeholders seeking for an intervention in a matter that suggests the community of Gbane has been short-changed by Shaanxi Mining Ghana Limited.

The group beliefs the failure of Shaanxi Mining Company Limited to honor  details of a memorandum of understanding between the late Chief and the company is enough reason to return the lands currently being mined. They also allege a disregard for safe-mining practices, a reason behind numerous mining accidents in the area. The group further alleges human right abuse by Chinese nationals, with victims being members/natives of the Gbane community.

The group has therefore announced the intention to stage a 90-day-long picketing in the Talensi District to press for their demands. This will come off from the 10th of January,2020 to 10th March 2020 in Gbane where the company operates.

The group has also petitioned the relevant authorities detailing their grievances and contents pf a an outstanding memorandum of understanding yet to be said to have been signed between the community and the company; however, the Chinese company has breached.

Below is a copy of the petition

We the leaders of Gbane for Peace and Development are aggrieved with the recent happenings of the Chinese support mining company called Shaanxi and its local counterparts Pubortaaba Mining Group and Yenyeya Mining Group led by Charles Taleog Ndanbon and Awudu Pard who is the Chief of Gbane and has been at large since 2018.

We hereby cry out for the support of stakeholders i.e. the media, the Minerals Commission, the police, the Bureau of National Investigations (BNI), the Regional Security Council led by the Upper East Regional Minister, Hon. Paulina Patience Tangoba Abayage, and the Upper East Regional House of Chiefs to as a matter of urgency intervene to stop the Chinese and its local operators from operating further to pave way for thorough assessment of their operational safety practices.

This has become necessary because of the rampant murder of our people in the name of accidents as described by the PRO of Shaanxi, Maxwell Wooma, any time deaths occur. We wish to draw the attention of the general public to the fact that since the inception of the operations of the Shaanxi Mining Company Ltd in the Talensi District, Gbane as a community has not known peace and no development whatsoever has taken place in the name of mining for gold. Painfully, we wish to unequivocally state that the operations of the Shaanxi Mining Company have caused the deaths of 64 men including some Chinese nationals, and about 83 men maimed, others had their fingers, toes and some other parts of their bodies chopped off in what was described by Shaanxi officials as accidents which we think could be avoided. Recently, a worker of Shaanxi was deliberately burned with the flames of a welding machine by a Chinese national who works for Shaanxi. The matter is being massaged by the District Chief Executive (DCE) of Talensi and some traditional rulers. This can be verified from the BNI in Talensi.

Again, we the Leaders of Gbane for Peace and Development are disappointed over the actions of the Shaanxi Mining Company Ltd after leasing a piece of land of 71.16 acres to them for settlement and to safe-keep their support service mining machinery. Unfortunately, under the reign of the late Chief Nab Pubortaaba Nabil, a memorandum of understanding (MOU) was signed between the Gbane community and the Shaanxi Mining Company Ltd for the land leased valued at 28.458 million Ghana Cedis. Shaanxi has decided to rob Gbane of their land and has since not followed the memorandum of understanding signed in May, 2013. All attempts to get Shaanxi officials to comply with the MOU had fallen on deaf ears. We cry out to the authorities that matter to revisit the MOU which spells out the constructions of other amenities such as an irrigation dam, a social centre, places of convenience (KVIP), roads, etc.

We are pleading to the Media Coalition against Illegal Mining to as a matter of urgency help investigate the large-scale mining activities being practised by the Shaanxi Mining Company Ltd in the name of rendering support services to their local partners. We think Shaanxi operations are illegal and as such need to be sanctioned, but to our dismay, some media institutions specifically in the Upper East Region have decided to blacklist we the indigenes of Gbane to favour the Chinese. This is so because any time we smell a rat around the accidents and deaths involving our people as well as disrespect to the Gbane community at the hands of the Chinese and their local cronies, the media whose duty is to be the voice of our people turn to be greased in their palms by some Shaanxi officials.

We are reliably informed that as usual of them they keep finding ways and means to bribe authorities any time they fall foul of the law. We the Leaders of Gbane for Peace and Development have received several complaints from small-scale mining enterprises in Gbane namely Unique Mining Group, Obuasi Mining Group and an exploration/mining company called Cassius Mining Company that Shaanxi and their local partners have trespassed into their concessions and it is evidently true that the Minerals Commission’s findings prove that Shaanxi has actually trespassed into Unique Mining Group’s concession. This report was made known to the public by the Minerals Commission in 2014. It can be verified at the Minerals Commission’s offices in Bolgatanga and Accra. We are, therefore, respectfully asking the authorities that matter including the Minerals Commission and the Ministry of Lands and Natural Resources to investigate the allegations of trespass by Shaanxi into the others’ concessions and to come out with an amicable solution to avert the existing conflict from escalating into bloodshed.

We the Leaders of Gbane for Peace and Development humbly suggest to the Upper East Regional House of Chiefs to come to our aid to settle our differences between the Shaanxi and the traditional authorities of Talenteng. This has become necessary because some traditional leaders are on record to have been supporting the Shaanxi Mining Company Ltd to rob and kill us on our own homeland. We think it is unfair and we would like the members of the Regional House of Chiefs to save us from our wicked traditional rulers.

Again, Gbane has been there without a chief for the past two years, which has given room to other traditional rulers who are not indigenes to superintend over the affairs of Gbane. Sadly, we have been reliably informed again that our chief who happens to be a counterpart of the Shaanxi Mining Company Ltd has travelled to China for no reasons given. We are crying out again to the Regional House of Chiefs to invite the Tongo Rana into settling the dispute between we the leaders of Gbane and the Shaanxi Mining Company Ltd immediately to avoid a clash because we cannot accept the rate of murder of our people because of their bad mining practices.

We conclude by asking all well-meaning Ghanaians to sympathise with us and to support us to get the powers that be to get the right thing done for the people of Gbane and its environs. We call for solidarity from all members of Talenteng to join us to picket on our land that has been taken over by Shaanxi. Plans are underway to contact the security agencies of the region to draw a roadmap for the picketing which would last for 90 days. God bless the good people of Gbane. God bless the good people of Talenteng.