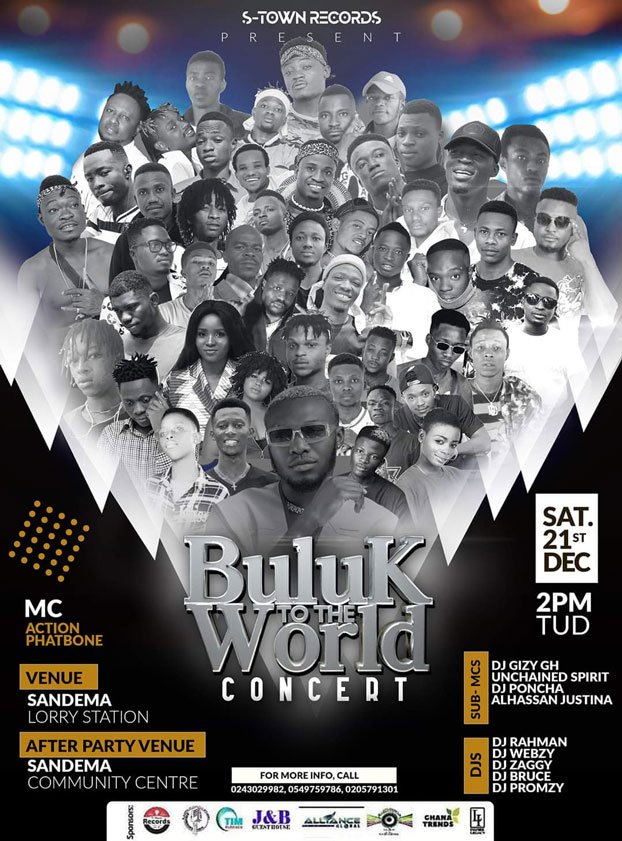 Last year Dj Gizy and his crew put-up a stellar of an event in Sandema; christening it Buluk to the World. The objective was to thrill people of the two Builsa Districts to awesome musical performances by largely musicians of Builsa Extraction. Despite a theme that exudes a limitation, the platform was equally given to musicians from across Ghana to showcase their talent and endear themselves to fans in Buluk.

True to the intentions of the organizers, the two core groups i.e musicians and fans brought Sandema to live. The massive turnout corresponded with the eclectic performances by the various musicians thrilled fans and music lovers till dawn. What started as just an idea between a few friends gained roots that night.

Fast forward to 2019; the success of Buluk to the World has ignited a longing-for, such that several musicians are clamoring to be on the show. One of the Upper East Region’s budding artistes, Teflon Flexx who co-incidentally was planning to stage a home-coming event has therefore partnered with the organizers to deliver a charged show to all fans and music lovers. Teflon Flexx who is from Wiaga in the Builsa North District has been making inroads into mainstream Ghana music. As a result, he believes that it is only proper to take the music back to his roots. This suggests that this year’s event is definitely going to switch up.

Performances would be headlined by Teflon Flexx, with support coming from several other musicians. It is also rumored that Lynx entertainment signees Dope Nation would be joining the galaxy of musicians set to make the night of 21st December 2019, one that is filled with memories.

Buluk to the World is undoubtedly the biggest outdoor music-event in the entire Builsa area. Even though its only in its second year; the idea of a big-music night in Buluk has been cemented and would probably remain the fore-most music-oriented event in Builsaland for a long time.