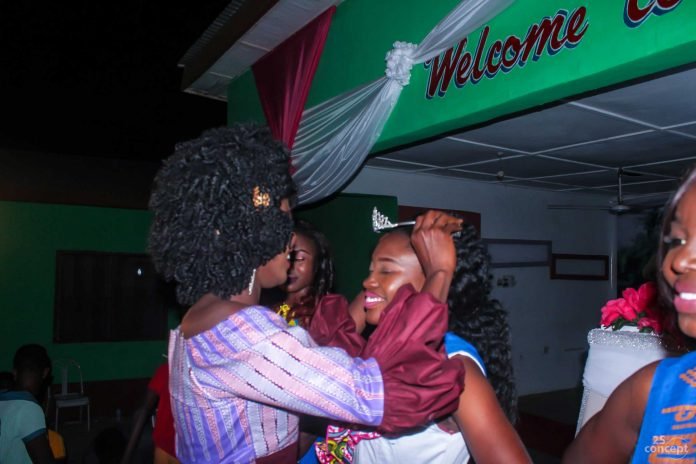 Miss Mercy Awolugutu of Manyoro has been crowned Miss Navrongo 2017. She is the winner of the 5th edition of the Miss Navrongo beauty pageant held on (the night of) Tuesday, 26th December, 2017 following a stunning performance that garnered a raucous ovation from the crowd at Fehna Guesthouse, Navrongo.

Mercy, a 19 years level 200 teacher trainee at the St. Bosco’s College of Education is the first lady from a community outside Navrongo township to win the five year old event.
The expedition began with 7 elegant ladies from communities within the Kasena Nankana catchment area vying to be the next Miss Navrongo for the next 12 months. But in the end, it was the gorgeous Mercy who went home with the bragging rights, dragging along the enviable and coveted Crown on a Beyond motorbike courtesy Happyman Bitters, chauffeured from Navrongo to Manyoro in addition to an opportunity to undertake a project of her choice with funding from Fehna Entertainment.

Mercy shrugged off stiff competition from Issabela, Zulai, Martha, Lydia, Camila and Jessica who also put up scintillating performances on the night.

Each contestant presented a message on the theme which was “Beyond the bed and the Kitchen”, as well as carefully selected cultural messages, talent show and perfectly orchestrated walks on the runway.

Isabella Pwadura of Nogsenia, a 21 year old level 300 French student of the Gbwewaa College of Education, Pusiga settled for the First Runner-up although she did her best to wow the audience and got the judges to confess their admiration for her prowess, but missed out on the crown. For her prize, she went home with a double door fridge. The third place ( Second Runner-up) went to a 23 year old student of the University of Education-Winneba,  Zulaiha Maasunuo of Saboro. She took home an oven burner. Zulaiha was also voted the most disciplined contestant and was presented an electric fan by Pakangyi Plumbing works.

The event which was marking its 5th anniversary had lots of musical and dance performances from some of the best performers in the region such as; heralds of honour-Navrongo, Gia cultural group, Willyyoung, Kobby and Xylene of Savanna Records, Carlblingx of Jogo bu empire, the sensational Anthony Zonga, Nafty dancers, Dagaow etc.

Below is a brief bio of Queen Mercy

Mercy started her education at the Prisons Nursery school at Cantonment, Accra. She then moved to Garrison Basic and JHS for her primary and Junior High where she graduated with excellent results which took her to St. Francis of Assisi-Jirapa for her Senior High education. Upon completion, she gained admission to the St. John Bosco College of education where she is currently at level 200 studying general program.

Mercy contested the 2017 edition of Miss Bosco and came out as the second Runner-up.

As the Miss Navrongo, she is hoping to Encourage the girl child by empowering them economically through entrepreneurial activities such as bead making, soap making etc.