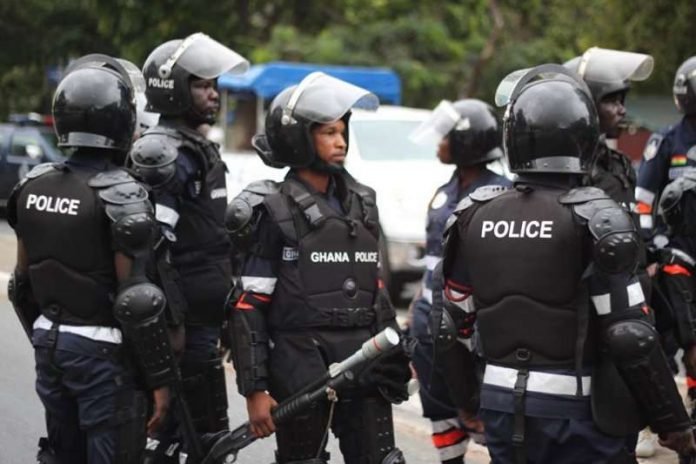 It is becoming clear that the Ghana Police Service will do all they can to protect their own men and women who visit violence and brutalities on citizens but will swiftly bring to justice anyone who touches their own. Too many examples abound: the policemen who shot and killed about 9 young men in Kumasi are still walking free; we also have those who assaulted the Citinews reporter and other journalists from other media houses ; up to now no action has been taken; the Ayawaso-Wuogon case is still fresh on our minds; no concrete action taken; and the very latest is the case of officer Aseidu and his colleagues who assaulted journalists, including a nursing mother and yet nothing has happened up to date. Early this morning, we heard the news that the policeman who assaulted that poor woman at Midland Savings and Loans is back to work with a clean slate; no prosecution at all. There are many similar assault cases involving serving police officers which have been swept under the carpet by this Police Administration.

Meanwhile, the police have been very proactive in not only arresting anyone who assaults or attacks police officers but also prosecuting them with supersonic speed. From the Kwaku Ninja’s murder case years ago to the recent case of the officer who was beaten up by the driver and his mate, we see the alacrity and zeal with which police handle persons who assault, attack or kill serving officers. We hardly see the same alacrity and zeal from the police administration when their own kind are the perpetrators of such crimes. This reminds me of the book “Animal Farm” and its famous refrain: ” four legs good, two legs bad.” Thus, it is as if, the police are giving us the impression that an assault case is only a crime worth prosecuting when police officers are the victims but not when journalists or members of the public are victims of police brutality. This is what I call “animal farm justice.” The best recurrent response we have often had from the police in matters of these nature, is to have the police PRO coming out to assure the public that “investigations and internal measurements are being done to deal with the situation.” After that, they go to sleep and sweep everything under the carpet as if nothing has happened at all. In some cases, they have tried to cover up by either denying that their men were involved or justifying the action by their men and women or simply saying, “investigations are ongoing to identify the culprits.” Matter finished and case die!

This animal farm justice delivery whereby arrests and prosecution only take place when uniformed personnel are the victims must stop if the police want to win the trust and support of the public in fighting crime. A crime is a crime or unlawful act regardless of whoever is involved and must be dealt with as the law permits. The recent spate of civilian attacks on police officers is a sure sign of frustration and mistrust by the public in the ability of the police to keep the peace and fight crime without fear or favour. I dare to say that such acts of lawlessness will continue unless the police demonstrate beyond any reasonable doubt that they have the balls to deal with miscreants within the service with the same supersonic speed and firmness with which they deal with cases where officers are the victims and civilians, the offenders.

I was one of the very first persons to condemn the beating of a policeman in uniform by a driver and his mate. I am glad the culprits have been swiftly arrested and are in court. It feels good to know the police are still very efficient in arresting and prosecuting civilians who take the law into their own hands and assault officers in uniform. What of the arrest and prosecution of miscreants in uniform who abuse their uniforms by assaulting journalists and members of the public? The reasons given for the refusal to prosecute the Midland cop who beat up a poor woman carrying a child as if she was his challenger in a world boxing title fight are laughable. Regardless of the so-called “internal punitive action” taken on the said officer, the assault case is a criminal act that ought to be have been prosecuted in a court of competent jurisdiction. It is was very shameful to hear the Police PRO, David Oklu, daring persons who were not satisfied with internal measures taken by the police administration to head to court! If there is no good cause to prosecute a serving officer who was holding a loaded firearm while punching the hell out of a poor woman, why are they quick to arrest and arraign a driver and his mate before court for assaulting an officer? What of the recent assault of the Ghanaian Times journalists by police officers which happened days before this police officer was assaulted by the driver and his mate? The journalists have even provided a picture of the officer who led the assault but as I write, not even a statement condemning the said assault by police officers on journalists has been heard from the police administration. So, why is the police administration swift in arresting and prosecuting members of the public who assault their personnel but very slow in dealing with cases involving some of their officers and men? Just as the police were quick to arrest and prosecute the driver and his mate for assaulting their own, can we have the same justice for the journalists beaten up by police officers? And even victims of other police brutalities like the Midland, Kumasi shooting incident and Ayawaso-Wuogon among others? It is legally and morally wrong for the Police Administration to always ensure justice for assaulted uniformed personnel to the neglect or exclusion of civilians assaulted by uniformed personnel.

It is sad to note that the selected justice principle of the police also favours very powerful people in society to the disadvantage of the poor. Recently, we saw a video of a member of parliament apparently attacking and threatening a whole regional commander circulating on social media. There were police personnel watching helplessly while their regional commander was being assaulted and threatened by this powerful MP. Nevertheless, nothing happened to the said member of parliament except for a love letter from the police administration to him, cautioning him. I am sure that if this was done by an ordinary citizen, he would have slept in police cells that day and probably ended up in court just like the driver and his mate. Thus, it appears the law only works against offenders who are ordinary citizens who neither have the power to lobby nor the financial muscle to hire the best lawyers to defend them.

Did I hear the police PRO, David Oklu, complaining about the indifference of bystanders when the police officer was being given the beating of his life? I am surprised the police PRO was not equally appalled by the knowledge that some of his men, instead of reprimanding their colleague who ran his unregistered motorbike into the vehicle of the journalists, joined him to beat and kick the said journalists or  the indifference of his own personnel at the time the alleged assault of the Central Regional Commander was taking place. David Oklu was not equally appalled by the many serving policemen and women who watched on as spectators while members of the public were beaten and kicked at Ayawaso-Wuogon by National Security Operatives under the command of my own brother, DSP Azugu. This smack of sheer hypocrisy and double-standards on the part of the Police Administration.

Members of the public are not blind to this selective application of the law by the police, hence, the inertia in coming to the rescue of uniformed personnel under attack.  Well, if the police administration wants civilians to act when police officers are being beaten up by members of the public, then the police administration must demonstrate that they can equally protect the public from serving officers who abuse their uniform by assaulting people at the least provocation. For instance, in the recent case involving the driver and his mate, it appeared the officer did not also conduct himself well given that a Joynews report from the scene of the brawl has just revealed that the said officer jumped on the moving vehicle with passengers onboard and assaulted the driver first.  This act forced the driver and his mate to retaliate by giving him a portion of his own medicine. If that is true, is that how he was trained to deal with traffic offenders? Was he not putting lives at risk by his very act of jumping on a moving vehicle with passengers onboard and assaulting the driver simply because he refused to stop? Will he be punished or left off the hook like the Midland officer who beat up a poor woman with a child and has been rewarded with a recall to duty instead of prosecution? Another case of personnel abusing their uniform is the assault on the Graphic Times journalists who were assaulted for daring to question a misbehaving officer.

In a nutshell, the police administration must up their game in terms of ensuring discipline among the rank and file of the force if they are to regain the trust and confidence the public hitherto had for them. To this end, they must deal decisively with the miscreants constantly dragging the image of the force in the mud through their unprofessional conduct. Thus, they must be seen to be fair and firm in applying the law regardless of whether their own men or members of the public are involved in breaking the law. While members of the public who break the law, including assaulting police personnel are speedily found and dealt with, police personnel who also abuse their uniform by subjecting journalists and members of the public to unwarranted attacks must also be dealt with in the same manner.  Until this is done, we have not seen the last incidences of citizens taking the law into their hands and assaulting uniformed personnel given that public confidence in the police appears to have fallen in a manner comparable to the dwindling fortunes of the Ghana cedi.