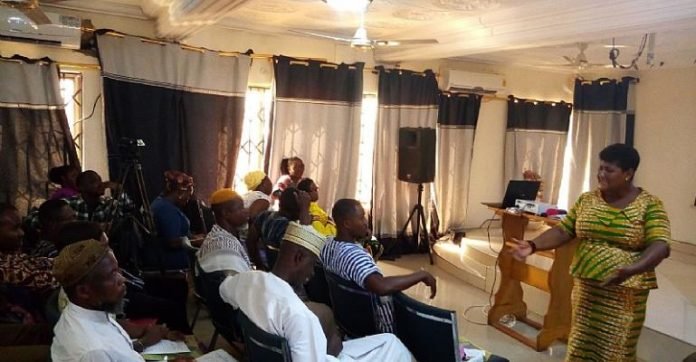 The United Nations Population Fund (UNFPA) in collaboration with the Department of Gender and Domestic Violence and Victim Support Unit (DOVVSU) of the Ghana Police Service have organized an advocacy programme to sensitize 60 traditional and religious leaders and solicit their support in reaching out to the large public, especially their followers and encourage them to speak publicly against some of the harmful traditional and cultural practices in the society.

The programme which was held in Techiman and sponsored by UNFPA also seeks to deepen the awareness and understanding of traditional practices such as child marriage, sexual and Gender bases violence as well as harmful traditional and cultural practices.

Mrs. Joycelyn Adii, the Regional Director of the Department of Gender in her welcome address said traditional leaders over the period have been the custodians of our tradition and culture and therefore are the important agents of change in ensuring long lasting changes in our communities in regards to our traditions especially the ones that are harmful to society. She added that Religious leaders have been a backbone of society, especially in Ghana where research have shown that about 90% of people in Ghana are religious people.

These groups she noted have large number of followers who listen to them and follow their teaching religiously. Hence, strengthening them to fight Child marriage, sexual and gender based violence and harmful traditional and cultural practices will yield the needed impact.

Supt. Setina Aboagye, DOVVSU Co-ordinator for Bono, Bono East and Ahafo Regions, and a resource person for sexual and Gender Based Violence (SGBV) said due to the societal settings victims are unable to give information for prosecution on many of the cases reported. She observed that the societal norms/settings which set the agenda for behaviour pattern ought and need to be dynamic.

Mr. Issah Tackyie, a teacher and Arabic Co-ordinator at the Ahmadiyya Muslim Mission in Techiman commended UNFPA, DOVVSU and Department of Gender, saying the programme have equipped them with knowledge that they can impart to their followers in the Muslim communities. He called for more education of SGBV to end child marriage and domestic violence.

Rev. Prince Owusu-Asaku, the President of the Local Council of Churches also thanked the UNFPA, DOVVSU and Department of Gender for the programme and call for intensive education against religious activities which seeks to cause violence such as alleging of some church members to be witches or force to confess publicly.

Madam Margaret Adoma, the Girl Co-ordinator for Ghana Education Service Directorate for Techiman Municipality observed that the involvement of the key stakeholders such as the traditional and religious leaders who command followers and have influence of societal setting would go a long way to intensive the crusade to ending child marriage, SGBV and harmful cultural and traditional practices in the society. She noted that efforts will be made to impart what was learnt to other stakeholders.

According to the Regional Director of Gender, harmful cultural practices are those that hurt, injure and humiliate people even though the practitioner may not consider them harmful. Such practices she cited include female genital mutilation, widowhood rites, early marriages and tribal. She observed that tradition should be dynamic, that is responding to changing times but the cultural practices that are dehumanizing should be abolished totally.

On sexual and gender based violence, participants want effective and strict application of the law to end the act and the violence. Mallam Osman Ahmed Yeboah, the Chief Imam of Nkoranza South Municipal recommended severe punishment by the law to protect the girl-child, especially those in school. “Most of the girls in my community are carrying children because they were impregnated by the men who cannot take care of them. Some of these girl are not benefiting the free SHS because of their state, so the law should work to end such situation in our society”, he lamented

Mr. George Yaw Ankamah, the Regional Director, Department of Children and a resource person for Bono Region noted that to end child marriage, SGBV and harmful traditional practices, everyone must be a Child Rights’ Advocate, stop hiding behind culture and traditions in violations of human rights as well as create awareness and put systems in place to assist victims.