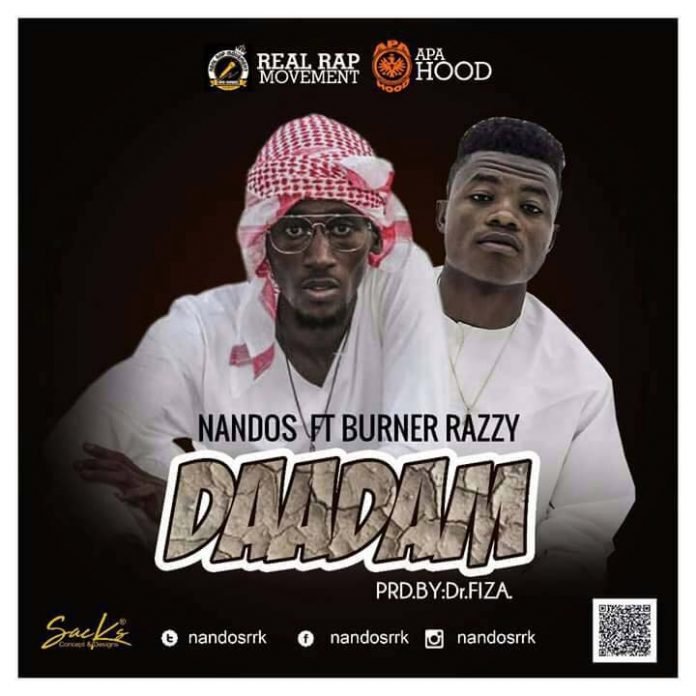 Nandos is one of my favorite rappers; in all sincerity I believe the Dagbandoo rapper should be replacing some wackos currently claiming to be rap enigmas in the Northern Regional Capital, Tamale. Despite rapping in Dagbanli, he possesses the kind of flow any rap aficionado will refer to as “sick”. Daadam is sick.

The genius in him manifests when he jumps on a beat fused with ethnic instrumentation; often danceable, rhythmic and infectious yet a “dexterous” lyrical flow. He rides every beat with an impeccable flawless flow, and his energy & Stamina is out of this world. Daadam is testament to the above assertion.

One major trait of this soon to conquer rapper is that he makes light issues off societal importance through the rap genre. Preaching messages that bring about societal change in a fun way.

His latest song titled “Daadam” featuring Burner Razzy and produced by Dr. Fiza is another masterpiece. He’s goes hard on this beat by cautioning people against what lies in the afterlife; the various vices that will go against mankind during judgment after our lives here come to an end. Nandos is that rapper who will reign for long when given the opportunity. I’m definitely a Nandos fan and can’t to grab my first album from him.

My next visit to Tamale will definitely have me hosting a one on one with this amazing rapper.

The release of Daadam is under auspices of Real Rap Movement & APA HOOD.

Enjoy more fine tunes from Nandos by subscribing to his channel .