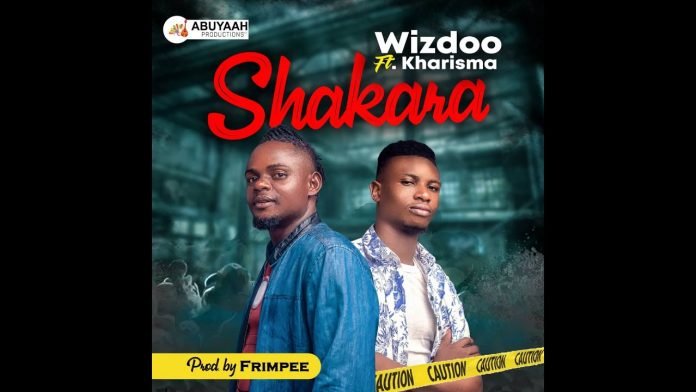 Shakara by Wizdoo (featuring Kharisma) is a beautiful Afro Beats song with some really interesting guitar strings. Aside the well thought lyrical content of Shakara, production is on point. This leaves a listener no choice than to get their feet tapping.

To say Shakara is a serenading piece of music is an under statement. From vocals, arrangement, to instrumentation, Shakara soothens and intrigues at the same time.

Born Wisdom Chigozie Boniface from Ebonyi State in Nigeria, Wizdoo is the definition of resilience in the face of hurdles. The young man who lived in Enugu State, and later Ihiala Anambra State appears to been a sojourner. However, living in Ghana has got him kick starting something he’s very passionate about. Sometime in 2014, he realized his love for music wasn’t quenchable, thus starting a career alongside his regular hassle as a businessman.

Wizdoo who lives in Sunyani, has a big dream. That includes working with amazing artistes such as Sarkodie, Wizkid, Davido, and several others. Wizdoo has collaborations with super-talents like King Ayisoba and some other underground artistes.

In an interview with www.atigsi.com, Wizdoo acknowledged the challenges of striving to become dominant. Especially from a place like Sunyani; however, he’s of the opinion that good music can come from anywhere. According to hi, it takes a move to Accra to gain the attention needed to boost a music career.

Whilst the above can be viewed from several perspectives, it is an exposition of the troubles talents suffer.

Shakara is Wizdoo’s gift to music lovers. It is also the precursor to an album to be released soon.

Shakara was released under Abuyaah Productions, Wizdoo appears ready for a jolly ride unto relevance.

Some few years ago when Mr. Eazi used to rock events at KNUST, few people least expected to see him become phenomena. Despite the immense talent he exhibited, he was still a stranger. His eventual success trashed the school of thought which advances a warped understanding of belongingness. The singer wowed Ghana, won Nigeria, and became a world class artiste. Will Afro-beats singer Wizdoo become another Mr. Eazi?

Many Nigerians have made Ghanaian a second home.

Check This out: 1Africa Mixtape Volume 1 By KV Bangerz is Here – Listen Up