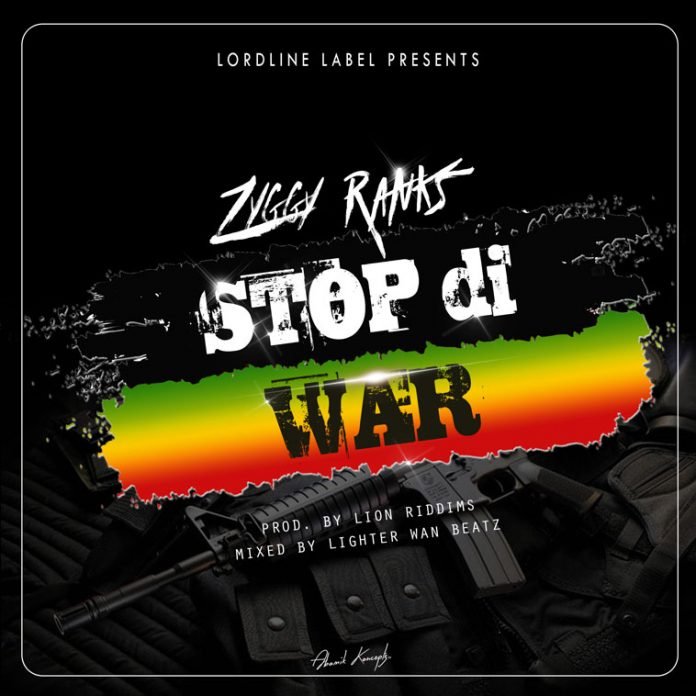 Reggae Music has often been associated with conscious lyrics; the kind that effect change, and affect thoughts. It remains one genre that gives a voice to the downtrodden and vulnerable in our society. Beyond the message in reggae music lies infections rhythms, and impressive vocal delivery. The genre has therefore been used by social activists disguised as musicians to preach for or against Causes they believe in. Stop Di War is one such song, coming from Zyggy Ranks, of the Upper East Region’s finest emerging reggae artistes.

Stop Di War is informed by persistent recurring conflicts in parts of the Northern Region as well as the protracted chieftaincy dispute in Bolgatanga. Whilst many may have never heard of conflict(s) in Bolgatanga, the indigenes are aware of the simmering dispute between two rival factions when it comes to Chieftaincy. Zyggy Ranks therefore coming in at a time when there’s calm, and significant attempts to fix the situation makes him a creative genius, and a man bringing social change through music.

Starting Stop Di War in a blend of languages (English & Gurune), Zyggy Ranks the affable musician who has garnered massive following for his craft delves into a creative rendition of lyrics; over a beautiful beat produced by Lion Riddims and mixed by Lighter Wan Beats.

25th August 2019, I visited Bolgatanga for a Youth Convention by the Church of Christ (SM); whilst at the Bolga Jubilee Park, the recurring sound of an AK47 caught my attention, I had to then inform all our security detail to be on a high alert as what I heard wasn’t firecrackers but the sound of an AK47…True to my presumption, it was confirmed that a house had been burnt just behind the Jubilee Park leading to a disagreement which in turn led to the rapid fire of an AK47 to serve as a warning against any aggressors; and yes, it was related to the Chieftaincy dispute in Bolgatanga. It is therefore refreshing to know that a young musician like Zyggy Ranks is using music to speak to the hearts of the people of Bolgatanga; asking them to let love and unity influence all dealings.

Zyggy Ranks is signed to Lordline Label. He’s previously released other singles which did creditably well in the region. Hold Di Paper & Somewae Bi brought his craft to the fore; however, due to the struggle of juggling between a music hussle and school, it has taken him almost a year to release this amazing song of influence. As a fan, I believe the wait was worth it. #StopDiWar

According to Zyggy Ranks, this song is not to necessarily say there’s a war in Bolgatanga, however, as a son of the land he would love the peace, love, and unity once upheld by the royals to return. He believes the traditional authorities can still work out their differences so that there’s never a spill-over of the issues.