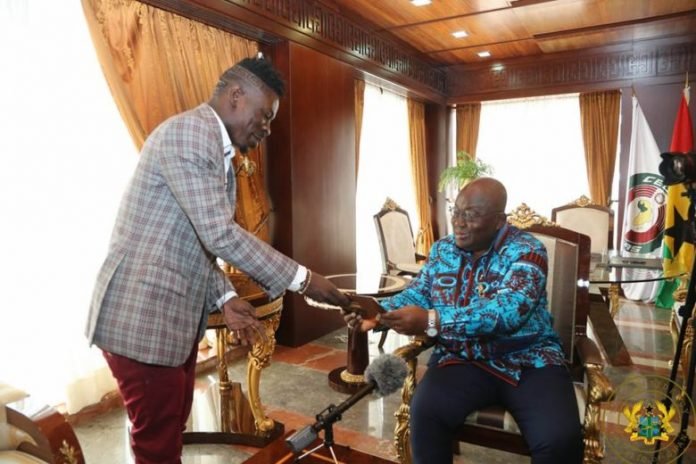 Multiple award-winning dancehall artiste and leader of the Shatta Movement, Shatta Wale, has publicly solicited support from foreigners for the Ghana Music industry which he said has been neglected by the government.

Shatta Wale, while performing on the second day of the Afro Nation Concert organised as part of the government’s ‘Year of Return’ initiative marking exactly 400 years since the first slaves left the shores of Africa, paused midway to make the plea to foreigners and returnees who are currently in the country for the event.

“Foreigners, please come and invest [in the music industry], the government doesn’t help”, he said.

His comments come only a few days after he scored the Akufo-Addo-led government 15 per cent for its performance in three years. According to Shatta Wale, the government’ self-assessment of 72% cannot be a true reflection of the economy because “there is suffering among the masses”.

“You see, me I don’t lie, this thing that I’m saying I just want the President to even know himself that people are complaining”

“Let me just give him 15 per cent because people are complaining you know, and me myself every morning the kind of people I have in front of my gate, as I’m even not there now I’m imagining the people there. If I go, it’s like a doctor visiting his patients, you know, school fees, sickness, grandmother, grandfather … On the real, he has tried but please listen to the masses because the masses are complaining too much and me, I like any political party that comes to power, me I don’t have any problem because I know how to hustle for myself. You know sometimes you have to pay attention to the streets…”, he said.

The Gringo hitmaker however encouraged the foreigners to feel free and come to Ghana because Ghana, just like Nigeria is a “free country”.

He commended the Afro Nation organizers for putting together the show and giving him the platform to engage with his fans especially “meeting fine ladies”.

Typical of him, he thrilled patrons to a very energetic performance dropping hit song after hit song till the show climaxed.