This is on the back of some sorry statistics from the hospital laboratory this year, which shows that at least 3 blood transfusions are done each day in the hospital. This means the demand for blood in the hospital is high. This situation has triggered reason in the youth groups to interest  in helping to sustain the blood banks and save lives.

According to the Arise group, it would take a collective effort to overcome the problems confronting the people of Navrongo and they believe  it is about time the youth took interest in the welfare of the people. 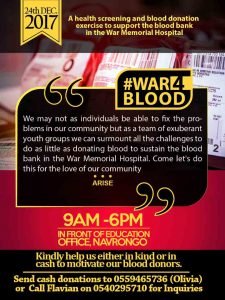 Known for organising the famous annual Miss Navrongo Pageant, Fehna Entertainment believes that the well-being of the people of Navrongo should be of paramount concern to everybody.

The two groups have thus taken up the challenge galvanizing support from all the youth in Navrongo to embark on this exercise which they christened “War for Blood” suggesting the aggression with which they want to get blood for the hospital.

The event is slated to come off on the Sunday, the 24th of December 2017 at the forecourt of the Ghana Education Service  (GES) offices in Navrongo from 9am – 6pm.

They are thus appealing for funds to help the motivate their blood donor.