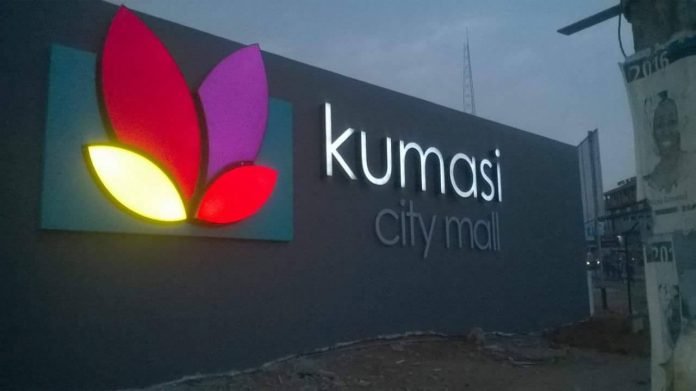 so having seen the plenty videos that flooded social media on the new kumasi city mall and its grand opening, this savanna boy decided to go see it for myself. eish! you thought i would lose guard and be in kumasi and not even try to see it. forget it!

the opportunity presented itself when i had to go help my brother in arms and solidarity, the headmaster extra ho, the letter head, the heading Comedian Aglah organize his Pure Comedy show in the garden city. this was the fifth edition and we wanted to make it big. the videos on social media came at the right time too because now the garden city had a mall and its denizens didnt have to come to accra to be in a ‘coded location’ at \west hills more’ with their 207 in the car park.

the accra kumasi more has been born!

there were several videos and i realize that some were intentionally staged like the one with the woman selling who receives a call that somebody wants to buy some of the stuff she is carrying on her head and the person is inside the mall and she was shouting over the noise in the mall whilst she was secretly recorded.

the most hilarious videos were the ones in relation to the escalator and how people just stood by to look at other people use the escalator and the funny clip about an older woman using the one going down whilst she tried so hard to go up and finally commenting to somebody off camera that ‘adi3 nu enkor oh‘ to wit the thing is not moving .

anyemi truth be told these videos gave me some wild ideas as to how best we could have a good laugh about various people in this country, imagine if a voltarian got on the escalator with his cat and the cat jumped out of his hands and he was trying to retrieve it.

furtthermore, imagine too if a man in a smock got on the escalator and he fell down and almost got hurt but wouldn’t and started cursing in any one of the northern languages. if either of these went viral you can imagine the insinuations and the laughter that will cause.

with all these in mind and laughing my head off i had to go see what the euphoria was all about for myself. so armed with me social media applications on my small phone i took a troski and headed out to see the mall. first impression was a wonderful edifice like all the shopping malls in accra layout was the same with Kumasi City Mall.