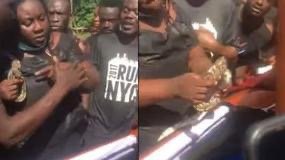 According to a background voice narrating why she embarked on the ritual, the snake bit the tongue of the deceased, resulting in his death.

Adomonline.com reported some friends of the deceased as saying that he used to play with snakes and his close python bit his tongue when he was trying to put it into his mouth.