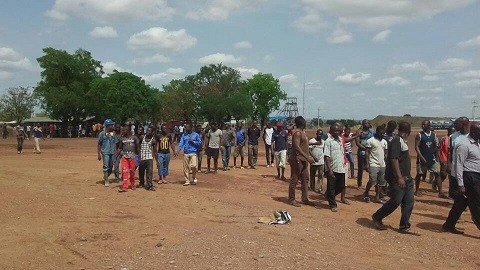 Some natives of Gbani, a rural community in the Talensi District of the Upper East region, have spoken strongly of a possible violent clash as they allege that a Chinese company barred three weeks ago from mining in the area has resumed work, causing further havoc to the environment.

The Ministry of Lands and Natural Resources on Tuesday May 2, this year, had ordered the Shaanxi Mining Company Limited to discontinue operations until after investigations had been conducted into some alleged target killings of local mineworkers by Chinese miners in the community.

Two days later, the company announced at a news conference it had shut down indefinitely and that it had sent 552 workers home until further notice. But a group of natives, who identify themselves as the Patriotic Citizens of Gbani, convened a counter conference last Friday, saying the Chinese miners had flouted the suspension directive and calling for their immediate deportation from the area.

“Shaanxi resumed their operation on the 9th day of May, 2017, shortly after the minister’s order. Chinese nationals are seen working every day. Even yesterday they were still blasting. The Human Resource Manager, Mr. Anokye, and one other [person] often inform some residents to take care because they are to blast their explosives with the

excuse that the minister has permitted them to work and cater for the security personnel deployed to protect their properties.

“Blasting cannot be secret. If you are in your bedroom, you would hear the sound. They are engaged in large-scale illegal mining because of the kind of machinery used and the shafts mounted in areas that do not even belong to the two concessioners that they are supporting. Shaanxi and their allies have engaged ‘six macho men’ to guide and protect them against strange government forces which would like to enforce the order of the minister,” stated the leader of the group, John Yaro, at the conference.

He added: “Gbani is dying. Gbani and its environs are under threat. We the citizens, having been aggrieved by their actions, are asking for the immediate deportation of all Chinese nationals resident in Gbani because they are irresponsible and have no respect for authorities. Possible violence is looming because of the operations of the Shaanxi Chinese [workers]. Their activities are affecting us. Our people cannot get water to drink. Our animals cannot survive. The shea trees are going. Our women can longer get shea nuts to process into shea butter. Now, our women carry Frytol cooking oil to funerals instead of the traditional shea butter.”

The group also claimed that the Chinese company, shortly after its arrival in the area to offer technical support to two local mining groups, Yenyeya and Pubortaaba, had requested for a parcel of land to house its staff.

According to the group, the Gbani Traditional Council in 2013 leased 71.16 acres of land valued at Gh¢2,845,000 for that purpose and signed a memorandum of understanding with the company, asking the firm to, instead of paying for the land in cash, provide for the community some amenities including a dam, ICT centres, public toilets, school blocks and a clinic among other facilities. The group said the agreement had been breached because the company allegedly took over the land but had not shown commitment since 2013 to provide any of the projects captured in the memorandum of agreement.

“Shaanxi has failed or refused to pay the valued sum of two million, eight hundred and forty-five thousand Ghana cedis (Gh¢2,845,000) since April 30, 2013. They must pay the full cost of the land leased to them [for residential purposes] with interest. They must compensate landlords and farm owners (who once occupied) their operational areas. Again we are reliably informed that Shaanxi Mining Company Limited had applied for 13.84km² of land at Gbani as large-scale concession without the notice of the traditional authorities,” Mr. Yaro said.

We are blasting to prevent illegal entry into our mine- Shaanxi

Responding to the issues raised by the fuming group, the Public Relations Officer of the Chinese mining firm, Maxwell Wooma, conceded that the company carried out some blasting after pulling the plug on operations on Thursday May 4, this year, as directed by government.

But he said the explosives were only being used to block access into the company’s mine by the illegal miners in the community.

“We have not flouted the minister’s directive. The blast is just to prevent illegal incursions. Up to now, the purpose has been that we have to block all illegal routes. And it has come down drastically because we are effectively blocking all the stokes. If you block all those illegal routes, they cannot have access to blast the support pillars and equipment underground. If the pillars collapse, the mine would cave in. That is what we need to prevent,” Mr. Wooma said.

He also refuted the group’s claims that the company had hired macho men to prevent anyone from enforcing government’s directive that no work should be done until the investigations had been concluded.

“The mine is under serious threats. It has been occupied by illegal miners who are blasting underground support pillars, destroying underground equipment, preventing maintenance and care providers of the mine from pumping water- a dangerous situation that may lead to severe flooding of the whole area. We reported this nationally, wrote letters to the minister, copied to all the security services. It has taken us time to get responses officially.

“The people we have recruited as internal security have been overwhelmed because on daily basis we have illegal miners numbering over 100, sometimes up to 150, overwhelming the security that we already have. We just decided that let us recruit more people to beef up security. These illegal miners come down with machetes, clubs, locally made pistols. How would you overcome these people? We recruited ordinary labour, not macho men, to ward off the illegal miners,” the PRO stressed.