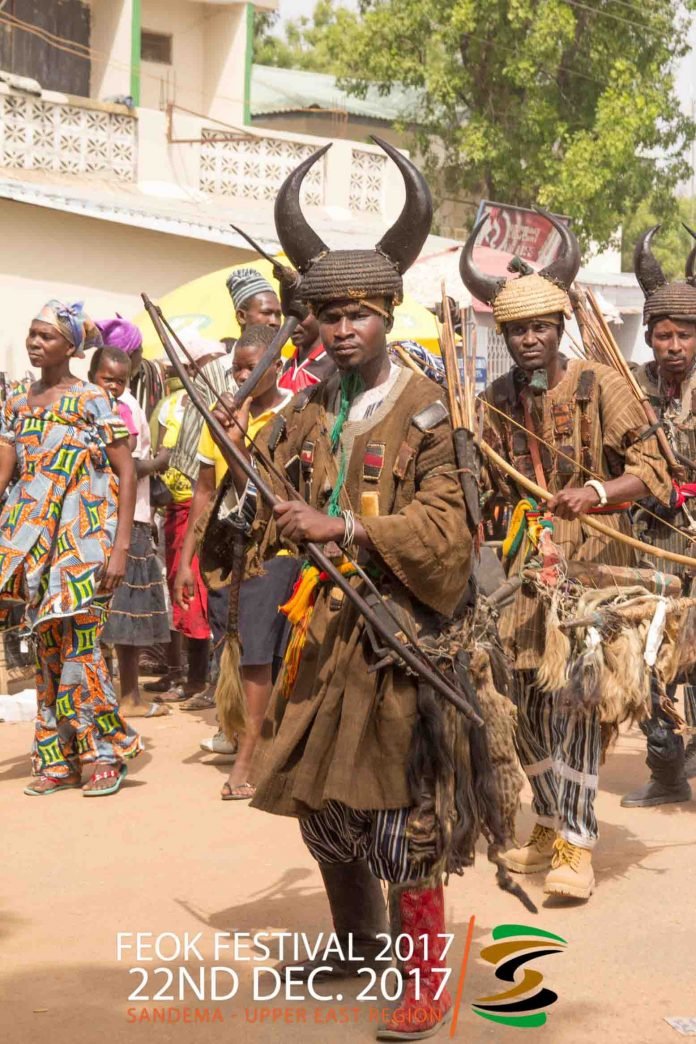 Builsa Feok is celebration of bravery and a bountiful harvest. The event is not confined to merry making and the pouring of libation. It is more centered on a unified celebration of one festival by 13 autonomous towns; though linked by lineage, language, locale and similarities in cultural practices.

Characterised by a massive influx of indigenes from all over Ghana (the world). Many simply come to Sandema to witness the famous war dance/march believed to have been a major tactic used to repel & defeat slave raiders in colonial times. The nostalgic war dance/march is enhanced by the beautiful Smock apparel fitted with talismans; resonating the traditional beliefs of Buluk. The different sizes of the talismans signify different spiritual efficacies, further denoting the traditional nature of the celebrations.

Warriors who double as hunters hang several animal skins & bones as part of their regalia.

The majestic back and forth strides in semblance of a marauding bull is believed to have re-enforced the camouflage tact adopted by Builsas in times of war. The horned hats, the sharp axe, as well as the bow and arrow remain a Builsa warriors tool-kit. The arrows are laced with poison in true war situations.

The Archery competition often held a day after the grand durbar of the Chiefs and people is proof of our superiority in using arrows as weapons during war. It has been said that some of our great warriors where master archers on horseback.

Builsa Feok in its truest form is therefore the spirit of Buluk.

The Spirit of Buluk

As the spirit of a unique people, each celebration must assume a milestone and a new phase for our forthright march towards economic emancipation.

The above has governed the celebrations since the inception of Feok by the late Nab Ayieta Azantilow. The thematic celebrations are testament to the development oriented nature of the celebrations. Whilst we may argue about the effective pursuance of the themes that characterize each celebration, we can also re-orient our minds to adjust for a take-off. One that fully sees the realization of set targets by way of the governing themes.

Such is the nature of a spirit – oneness for growth. The direct benefits for the business community and the gains for the two Builsa districts as tourism surges remain limitless. It is therefore prudent to see the spirit of Buluk and fully adopt it for empowerment of all.

The traditional Builsa is fearless, tactical and very resourceful. This assertion is as a result of the victorious wars fought to repel slave raiders. The unconventional tactics used by Builsa warriors, were later adopted by neighbouring towns lend credence to the tactical and fearless nature of our being. Our resourcefulness stem from our ability to turn any situation into gain and emerge victors. This may have accounted for the role of Nab Ayieta Azantilow in psyching the Ghanaian contingent drafted to fight alongside the British in Burma. It is therefore appropriate to explore Feok and its adjoining activities to open up economic opportunities for all. Opportunities abound yet we have done little to nothing in realizing the gains from those opportunities.

Checkout an article on Builsa Feok

Evidence of the slave trade abound in Buluk; this considers the multi-ponged fight approach in defeating slave raiders; Builsa-land definitely has insightful evidence worthy of visits to all who have an interest in the history of slave trade.

The birth of Buluk is quiet interesting and ascertaining the origin of Builsa’s and the reasons behind the 13 autonomous Builsa towns is worth exploring.

The myths surrounding the giant who lived in Kadema and the speculated total annihilation of “Vari” around Bachongsa  is also worth probing.

There is so much Buluk has to offer the world by way of tourism.

Relics from some battles with slave raiders still exist in Fiisa and some other places. the activities surrounding Feok is capable of attracting a huge volume of tourists when properly marketed.

When we open up by branding and marketing Feok well, a lot of jobs will be created…

I will be sharing some business ideals in my next article.

Check out an article on Wildlife in Buluk

Also Checkout Fao, celebrated by the people of Navrongo IT’S ABOUT TIME; FAO